Can you imagine living in a town where it’s Christmas all year round? From coincidental names like Garland and Snowflake to over-the-top holiday tributes (like the town that changed its name to a Secret Santa website), cities across the country are more than happy to embrace their wintry names—regardless of season or climate.

Using information from the United States Census Bureau, Stacker found 29 cities and towns across America with names that embody the spirit of Christmas. Some towns take the festivities more seriously than others—think Christmas-themed streets, year-round yuletide attractions, and huge holiday markets—while others reflect on the story behind the season. Let’s take a virtual sleigh ride across America as we learn about these festively named locations and the different ways they celebrate. 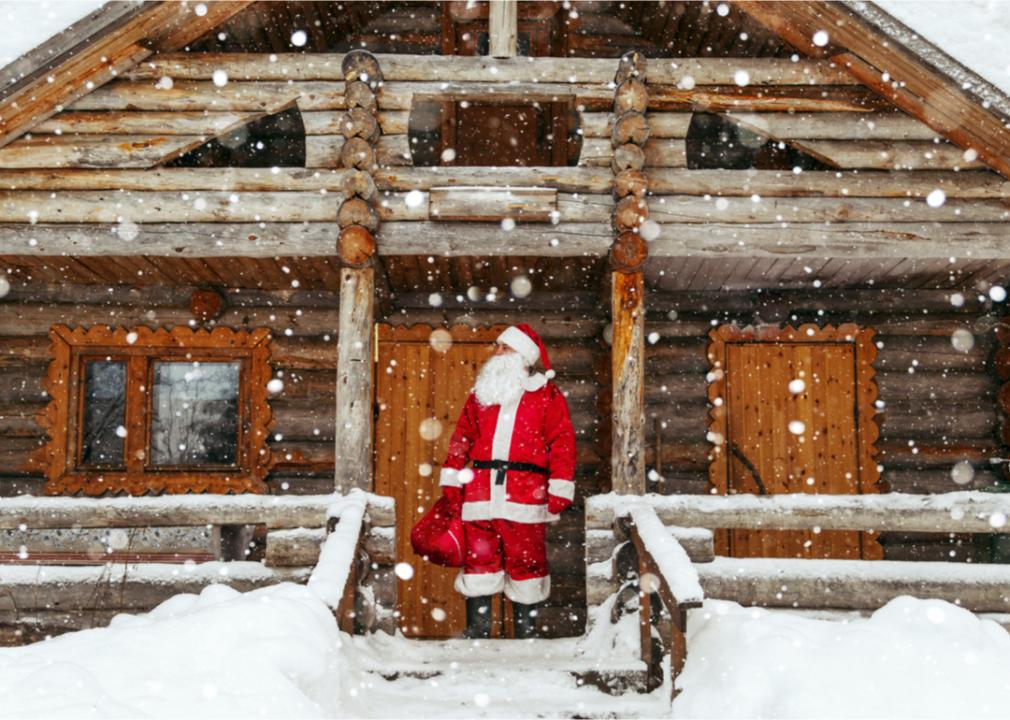 Nestled in New York’s Adirondack Mountains, North Pole is a small town that pulls out all the stops. It’s the home of Santa’s Workshop, one of the first American theme parks, which is open year-round for visitors craving holiday magic. Naturally, the festivities peak in December, with this charming destination holding special family weekends and events throughout the month. 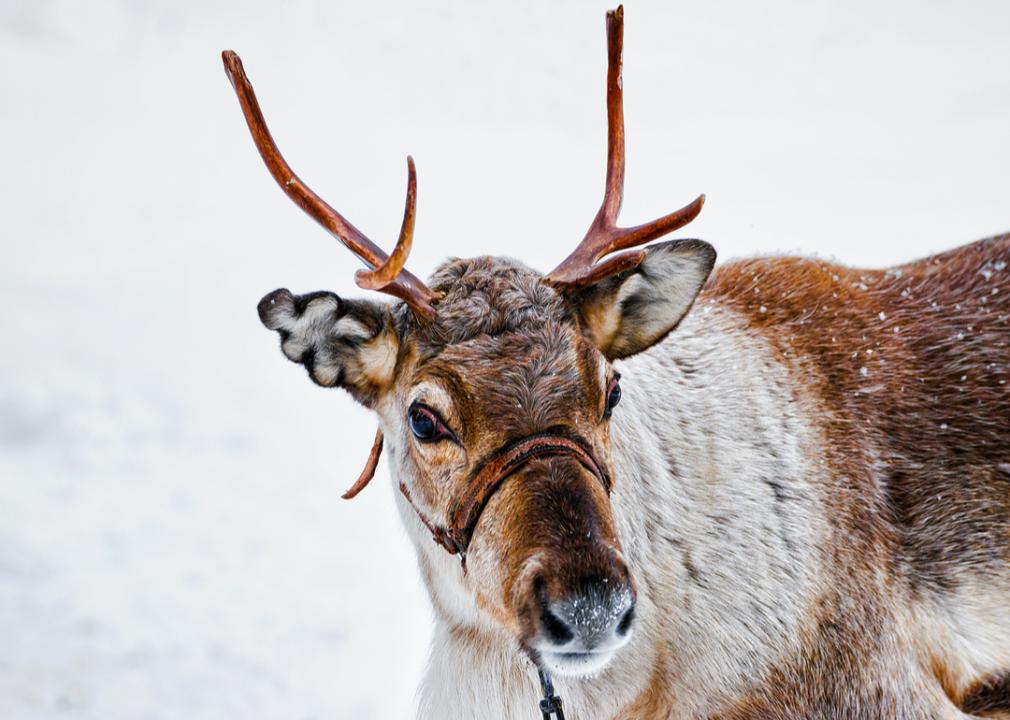 Located in the heart of Wisconsin, the tiny town of Rudolph is named not after the reindeer but instead for a boy who was born there. The red-nosed holiday icon is still important to the community: He’s featured on a stamp and postmark at the city’s post office and in a year-round window display at Fisher’s Antiques. The town hosts an annual Rudolph Country Christmas event that pays tribute to the most famous reindeer of all. 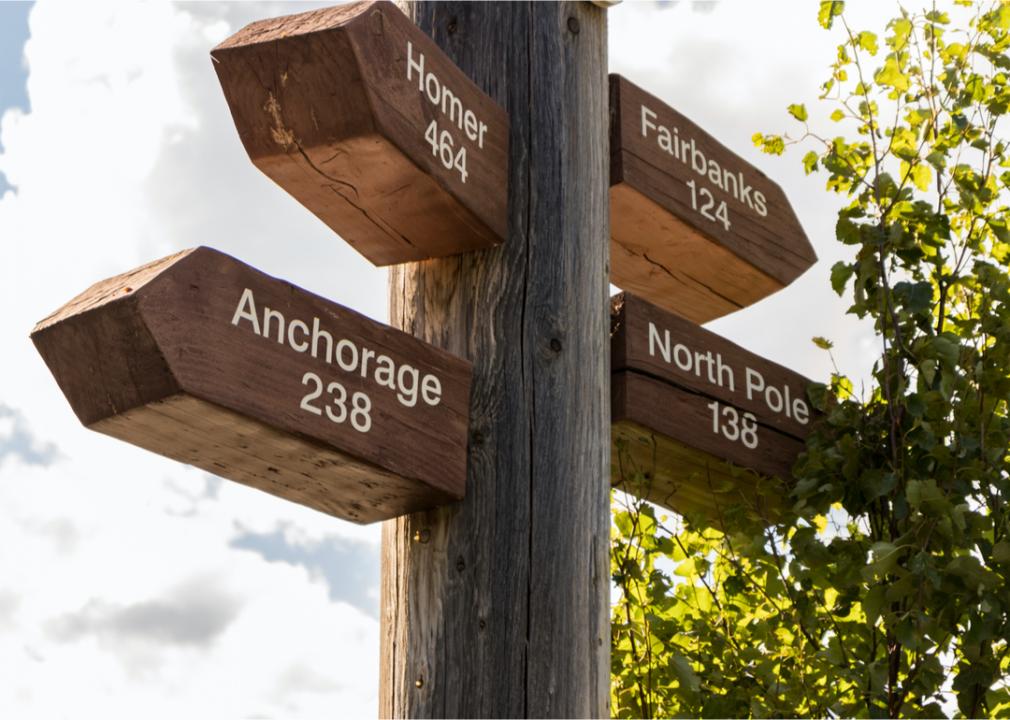 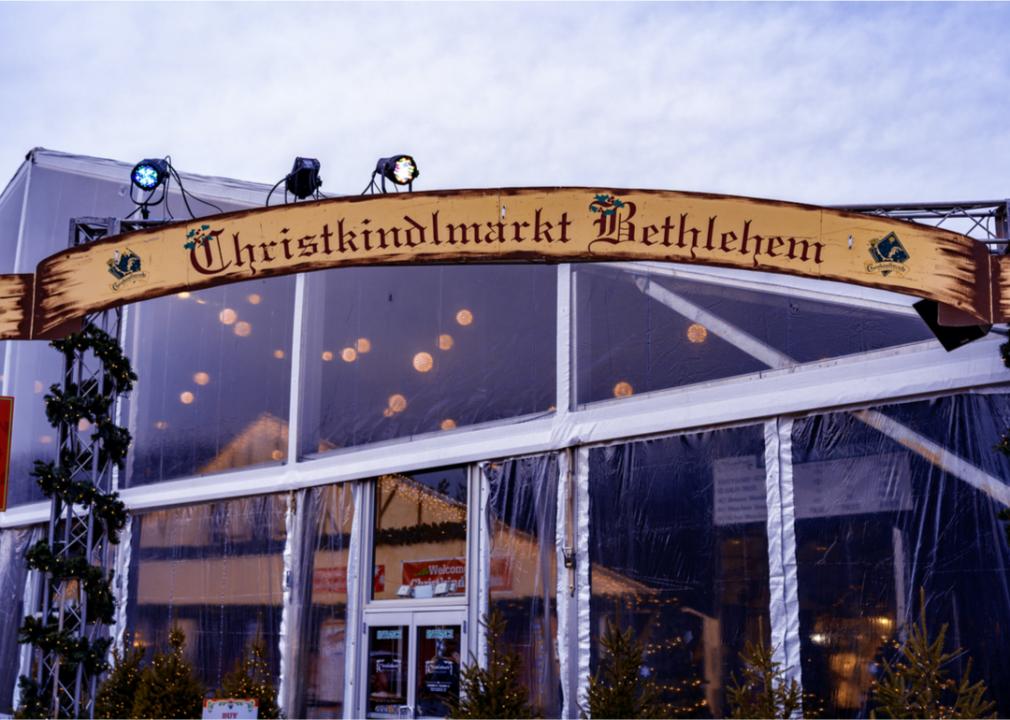 About two hours north of Philadelphia, the city of Bethlehem calls itself “Christmas City, USA.” Originally a Moravian settlement, the community was christened Bethlehem on Christmas Eve of its first year in existence. It now pays tribute to its German roots with its annual Christkindlmarkt, a European-inspired Christmas market recognized as one of the best in the country. 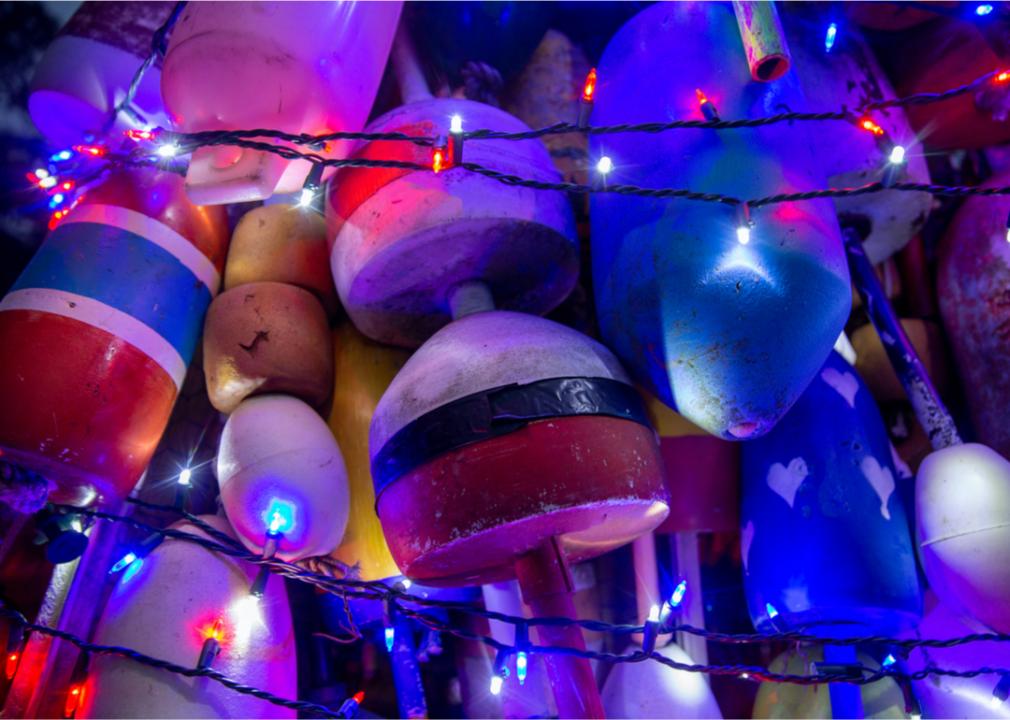 Located on the coast of Maine, the small town of Christmas Cove is believed to be named for John Smith’s landing there in December of 1614 (though there is some debate over historical accuracy). Despite its winter-themed moniker, Christmas Cove is actually most popular in the summer months as a prime yachting destination. 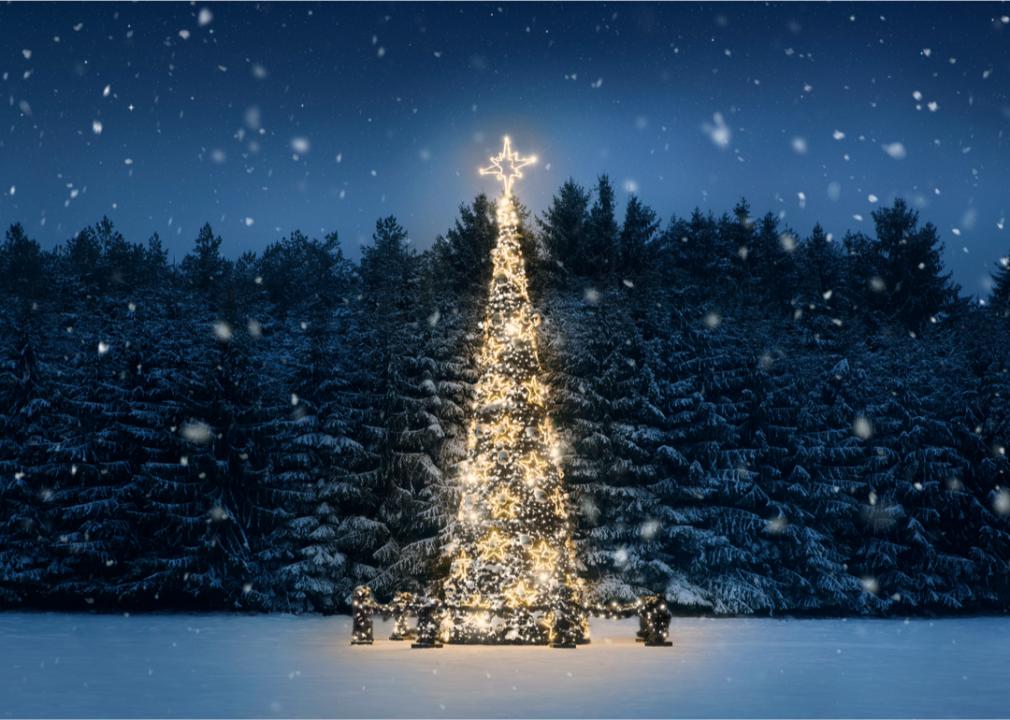 The small town of Noel is located in the southwest corner of Missouri. Noel bears the nickname “The Christmas City” because of its special holiday postmark, created by the town postmaster in the 1940s. The tradition has grown over the decades, and tens of thousands of people send season’s greetings through the town’s post office each year. 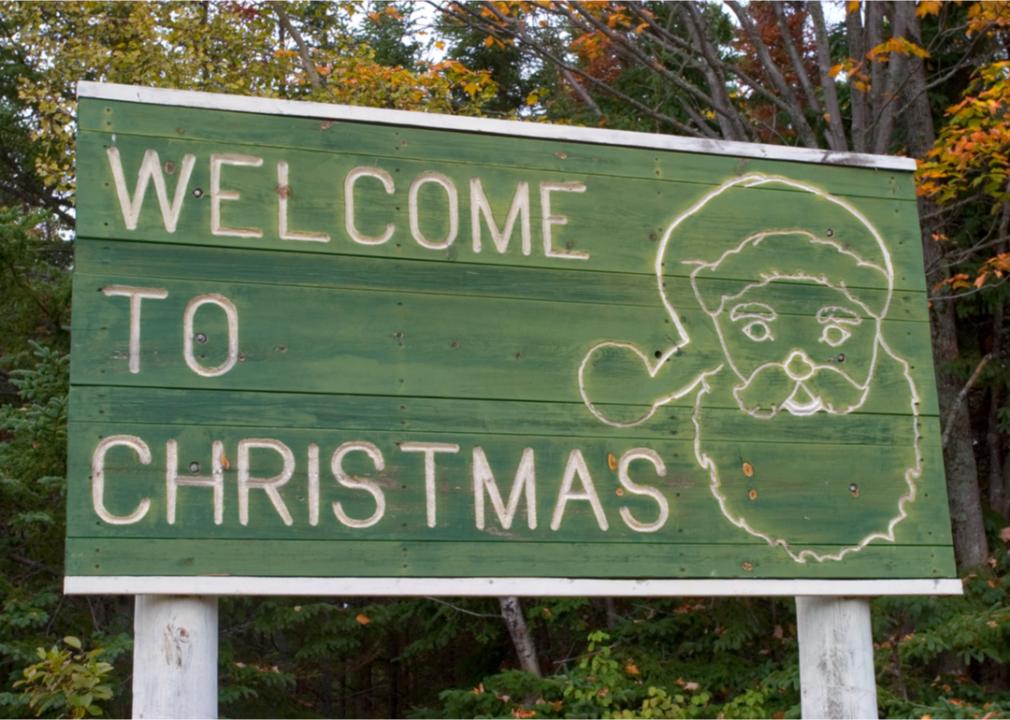 The community of Christmas can be found on the upper peninsula of Michigan and was named by a factory owner. Every business in town is committed to the holiday theme, including the nearby Yule Log Resort (located, naturally, on Candy Cane Lane). 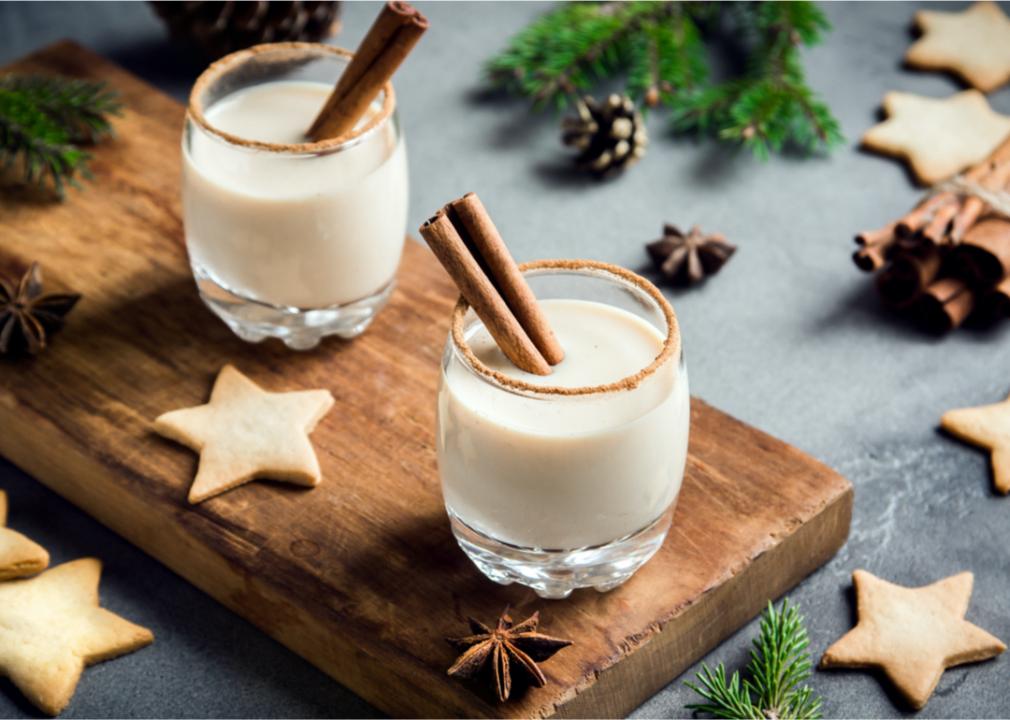 Depending on your opinion of this polarizing holiday beverage, the name of this community may delight or disgust you. Eggnog, Utah, is located in Garfield County and is believed to be named after the beverage served to ranchers there. Located at the southern end of Georgia, Dasher was not named after one of Santa’s reindeer, but rather the Daescher family who settled on the land. Regardless, the town celebrates the Christmas holiday with traditional festivities such as caroling. 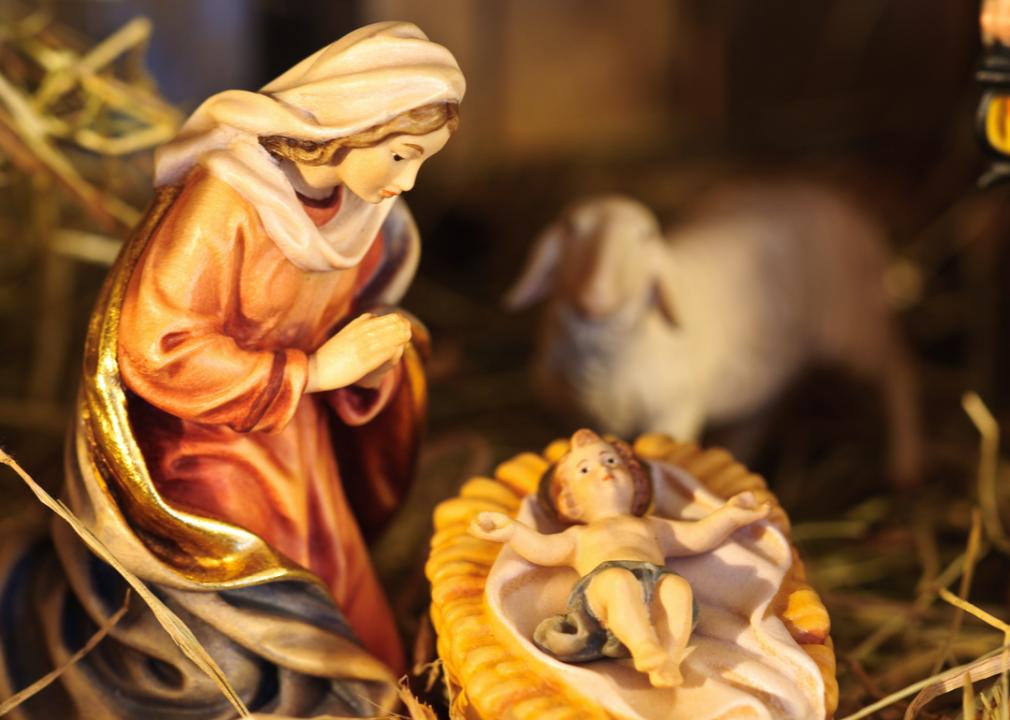 The coastal city of St. Marys lies on the Georgia-Florida state line and gets its name from the St. Marys River. You probably won’t see snowflakes in this temperate southern locale, but you can still get into the spirit of the season. Their annual Christmas in the Park event is held on the waterfront and features a trolley and free stockings for children. 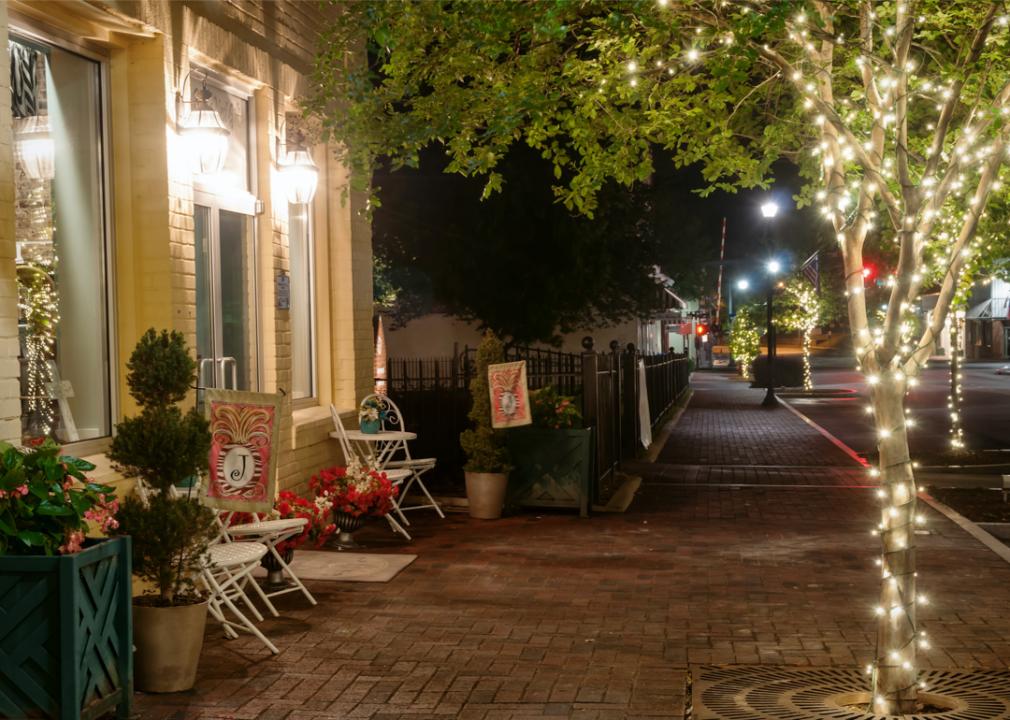 Suburban Mount Holly lies just west of Charlotte, North Carolina. Although the city was originally named for the Mount Holly Cotton Mill, residents certainly know how to get jolly, celebrating with an annual Christmas parade, craft market, and visit from Santa and Mrs. Claus. This snowy-sounding town in central Virginia is home to the Wintergreen Resort. During the holiday season, this destination offers events like Santa on the Slopes, craft workshops, and story time with Mrs. Claus. 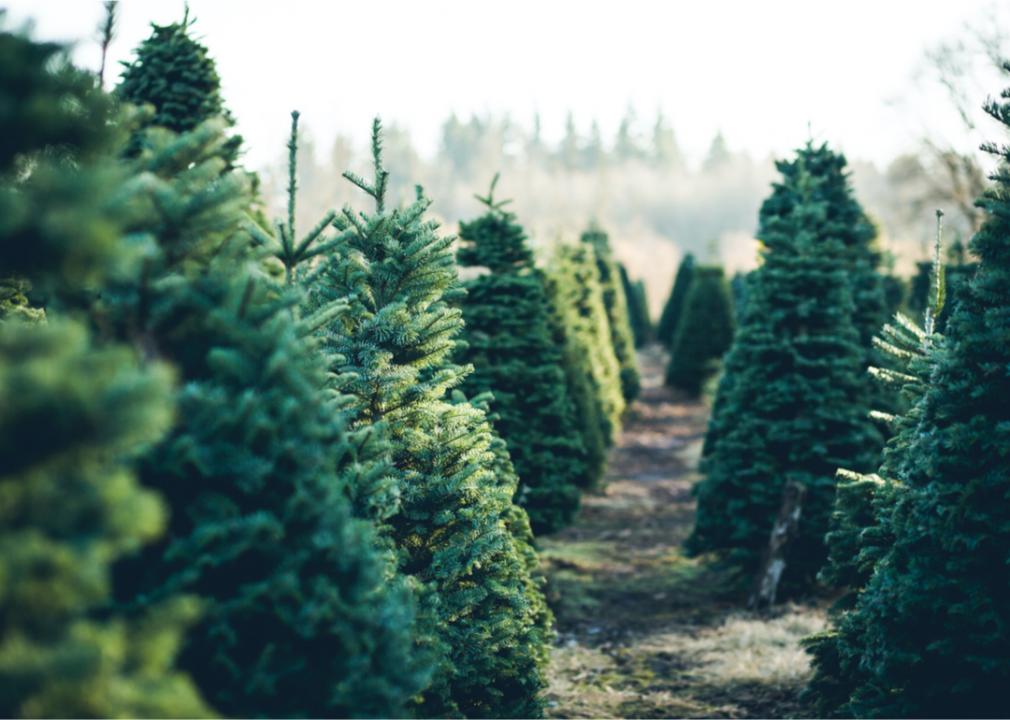 Located near the southern border of Alabama, Evergreen was named for its abundant foliage. The name inspires a festive vibe during December—the town lines its main street with Christmas trees and hosts an annual holiday market and parade. 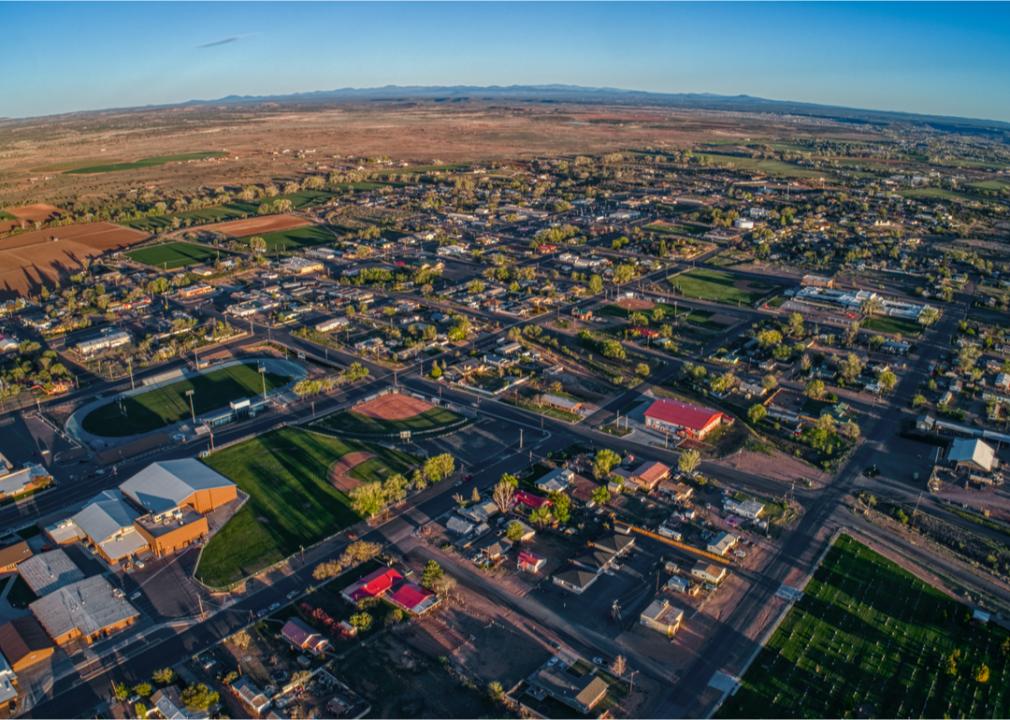 The small town of Snowflake is a three-hour drive from Phoenix. Its name comes from Mormon leaders Erastus Snow and William Jordan Flake. Even though Arizona winters typically aren’t white, Snowflake residents get into the holiday spirit with a 12 Days of Christmas event every December. 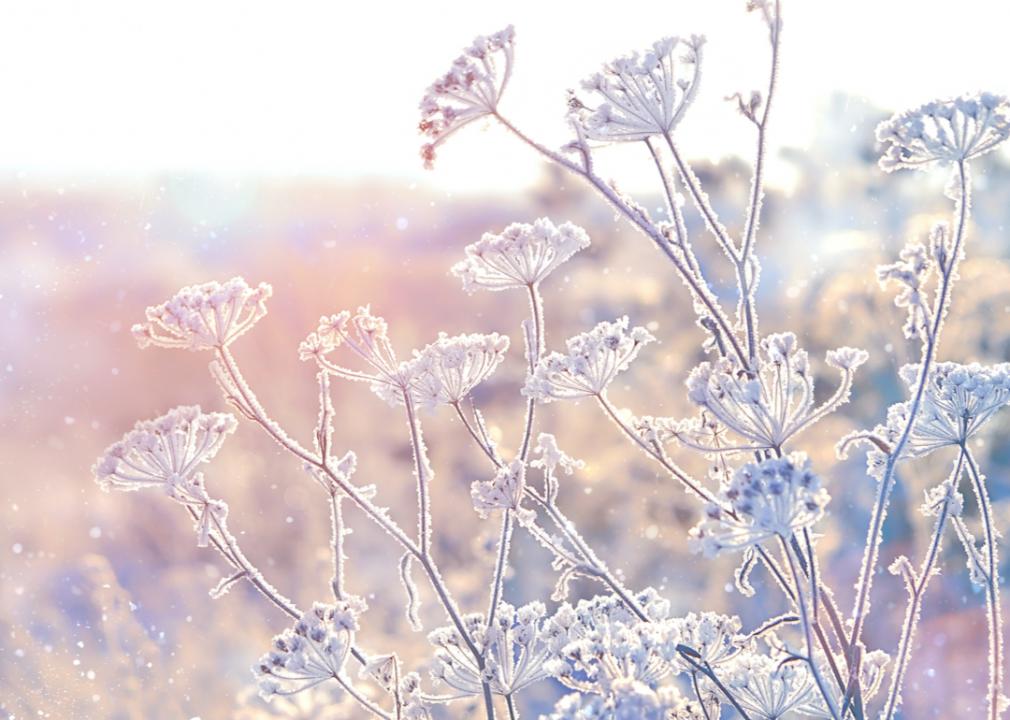 Christmas Valley is a small community in the middle of Oregon named after nearby Christmas Lake. Although the town is small in size, their annual Light Parade is big on Christmas spirit. The parade features holiday floats, caroling, and treats like cookies and hot beverages. 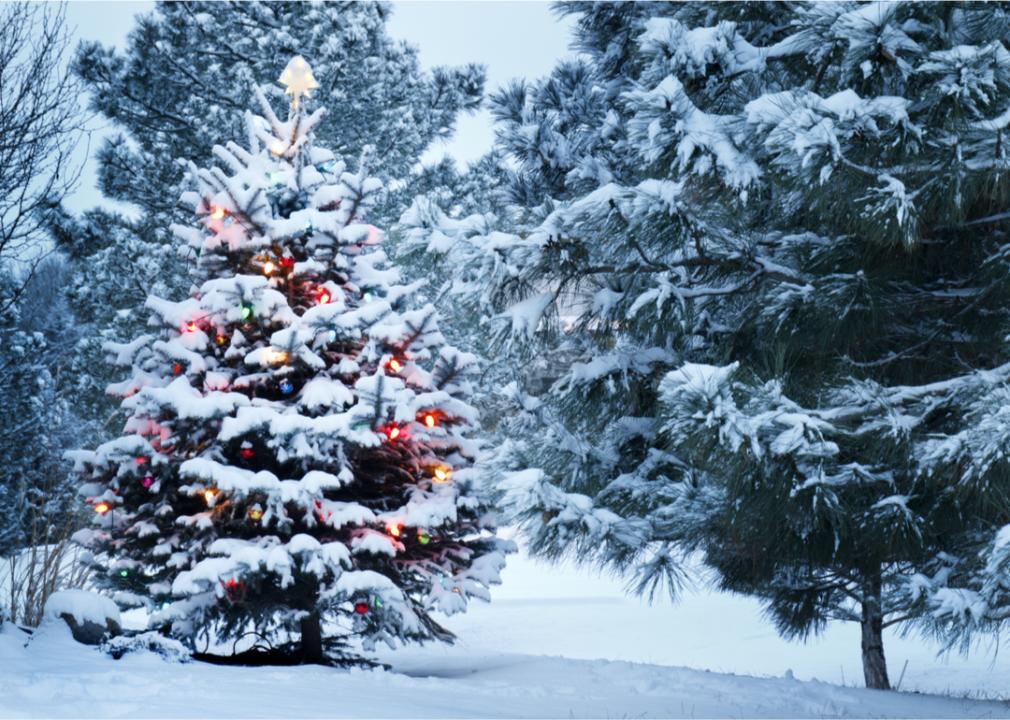 Close to the western edge of Illinois, the town of Joy has a post office that thrives during the holiday season. More than 12,000 cards from around the world are sent through every December to receive its special holiday postmark. 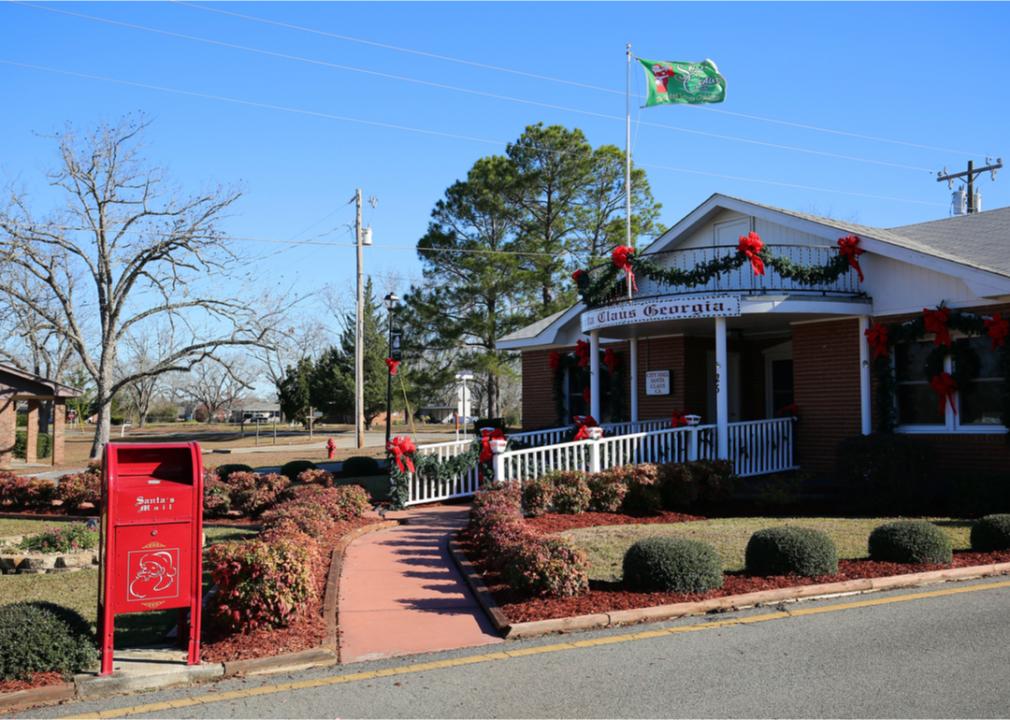 Located west of Savannah, Santa Claus is a place where residents can pack in as much Christmas spirit as possible (even though the town only consists of 0.2 square miles). Streets feature names like Candy Cane Road and December Drive, and jolly old St. Nick himself greets visitors on a sign marking the city’s entrance. 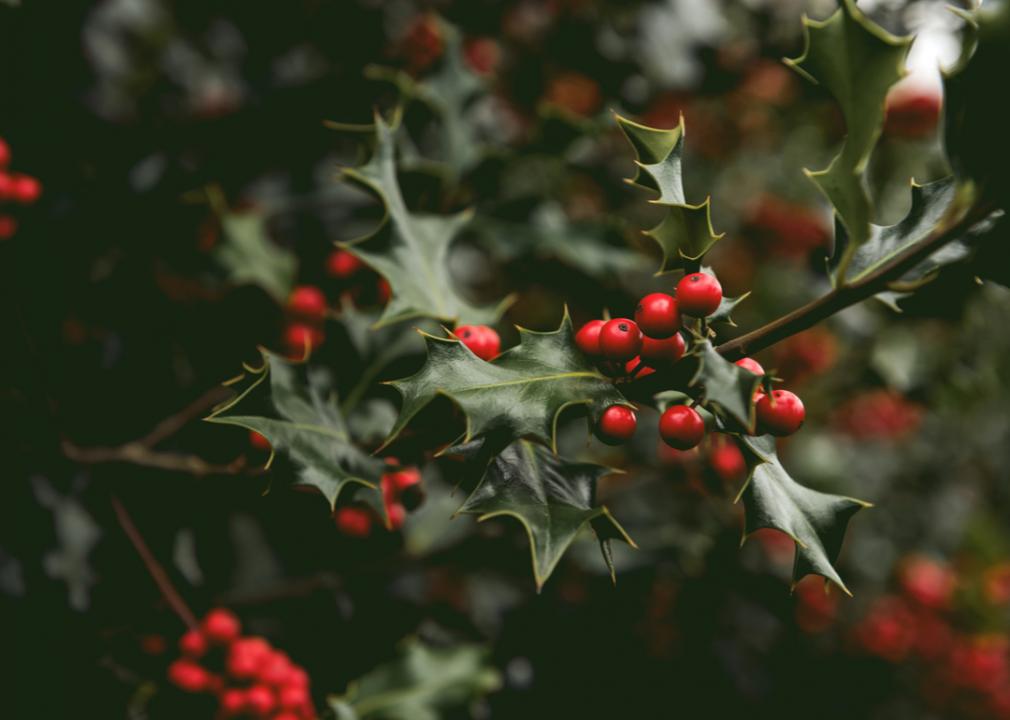 Close to the northern border of Mississippi lies the city of Holly Springs. The festive city celebrates the holiday by holding an annual Historic Homes tour, a ticketed event where visitors can walk through historic homes that have been decorated to the nines for the season. 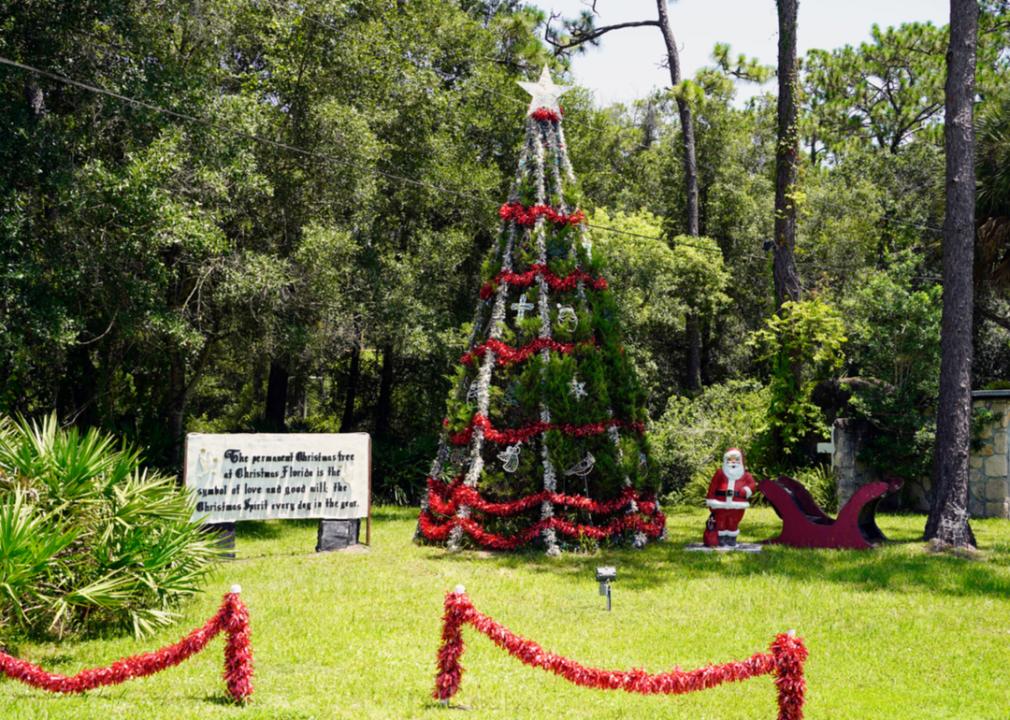 The town of Christmas is a short drive east of Orlando. It was named for Fort Christmas, which was built on Christmas Day 1837 during the Second Seminole War. People from all over the country send mail through the Christmas post office to get its postmark on their holiday cards. 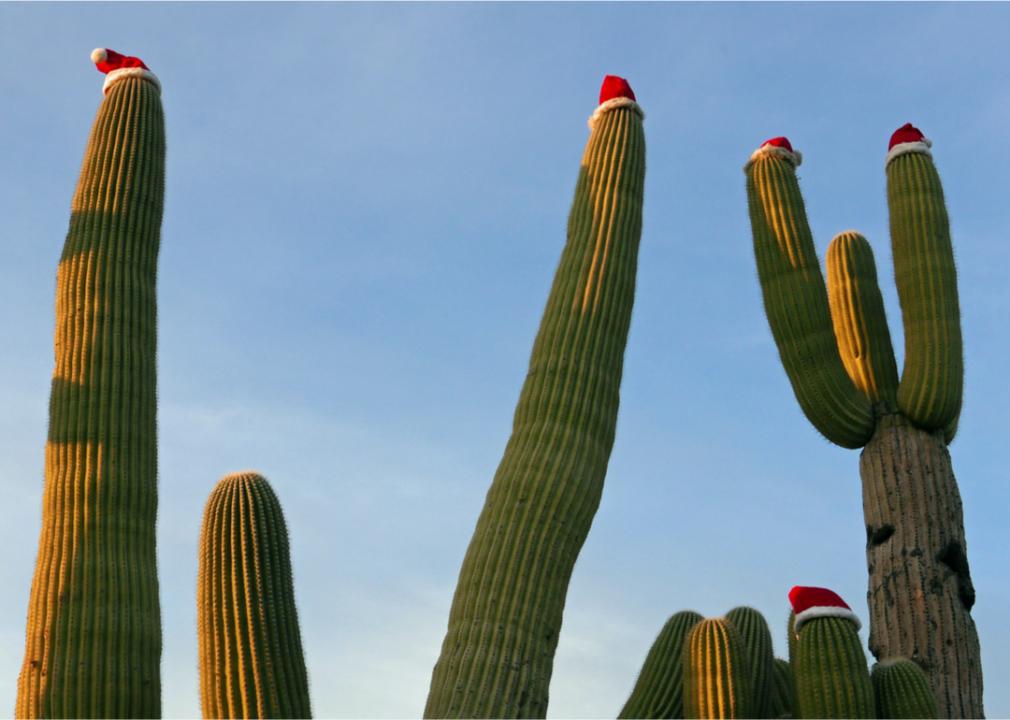 Fans of ghost towns will covet this abandoned Christmas-themed settlement in the Mojave Desert. The town’s Santa’s Land attraction was once a popular year-round holiday stop, but it ceased operations in the mid-1970s. If you’re looking for a (slightly creepy) blast from the past, you’re in luck: Its candy-striped buildings are still standing. Like Bethlehem, Nazareth is another Pennsylvania community founded by Moravian missionaries and named for a town from the Bible. To celebrate the season, the local Moravian Historical Society hosts an annual Christmas in Nazareth event that features storytelling, traditional treats and decorations, and craft merchants. 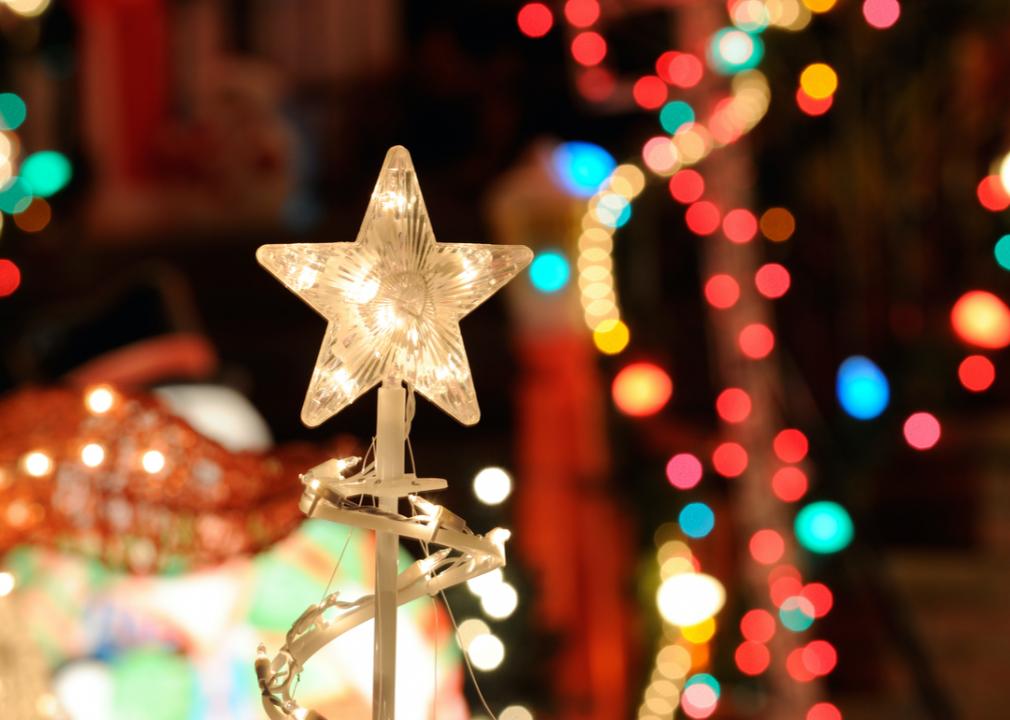 Another little town of Bethlehem sits on Lake Hickory in North Carolina. The town’s residents know how to get into the holiday spirit with their Christmas in Bethlehem drive-through. Local churches and volunteers put on dozens of nativity scenes that visitors can explore by car. 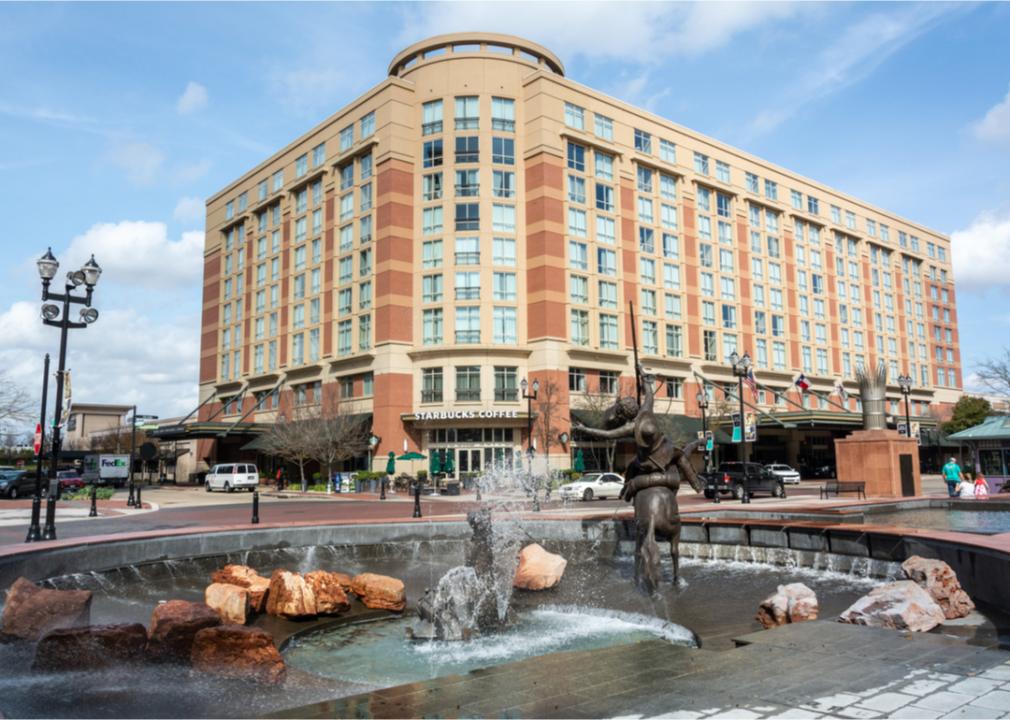 Located just southwest of Houston, the evocative city of Sugar Land is actually named for its connection to the sugar industry. The city celebrates Christmas with events in Sugar Land Town Square, including photos with Santa, caroling, and the lighting of a 40-foot Christmas tree. 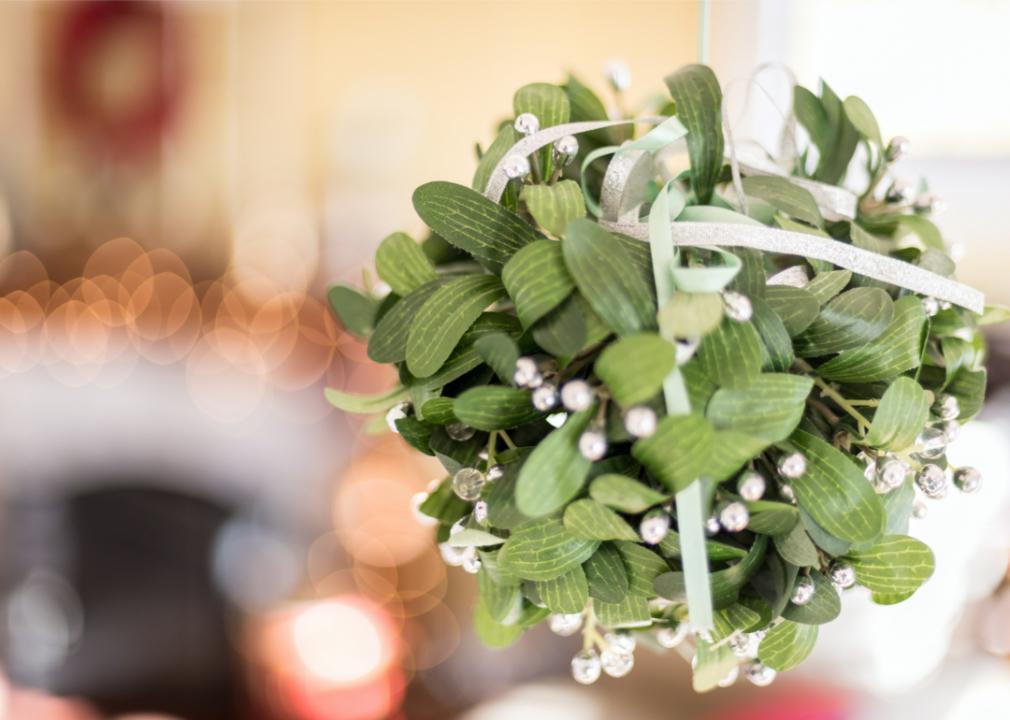 The town of Mistletoe was named for the plant, which is native to the area. Mistletoe is a well-known symbol of Christmas romance. This is due to its history as a fertility symbol, which has evolved into its current status as a yuletide decoration beneath which couples share a kiss. 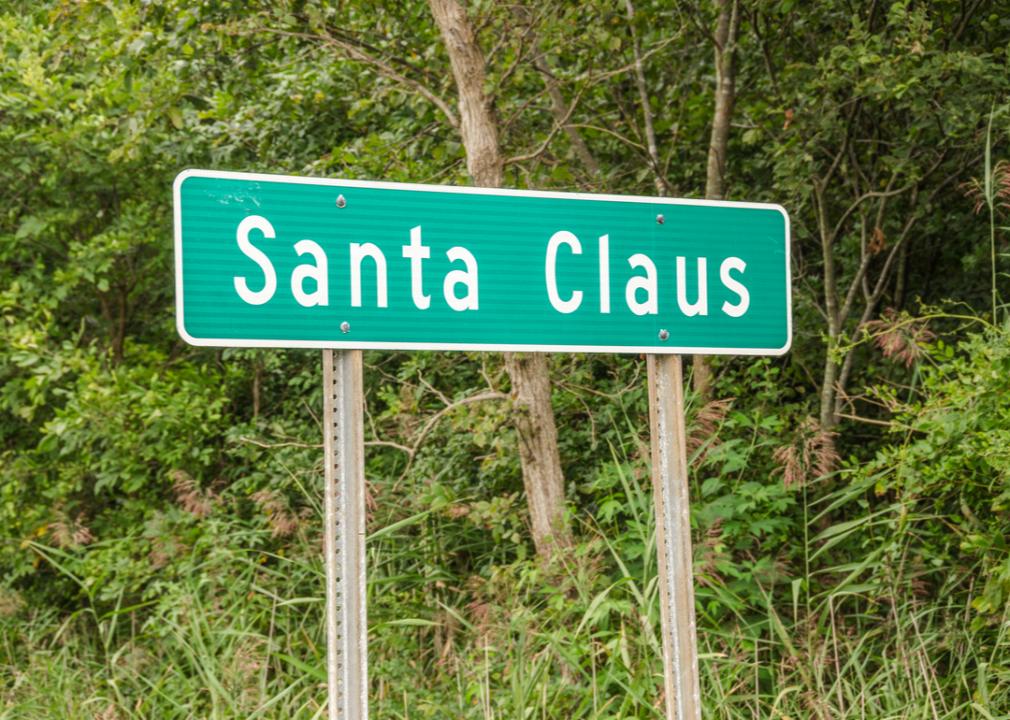 Here’s yet another town dedicated to old Saint Nick. Originally called Santa Fe, this Indiana town changed its name to Santa Claus and was once home to a decorative sleigh manufacturer. The area features a theme park called Holiday World & Splashin’ Safari, an annual 1.2-mile Santa Claus Land of Lights, and a live reindeer exhibit. A short ride north of Orlando is Winter Park, a town originally founded as a resort to escape frigid northern temperatures. Although the winters are mild, the town’s Winter on the Avenue event includes man-made snow, an ice-skating rink, a tree-lighting celebration, and a visit from Santa. On the shores of Lake Michigan lies the city of St. Joseph. To get ready for the holiday season, the town hosts events like Light Up the Bluff and the Window Wonderland, a tour of Christmas-decorated storefronts. 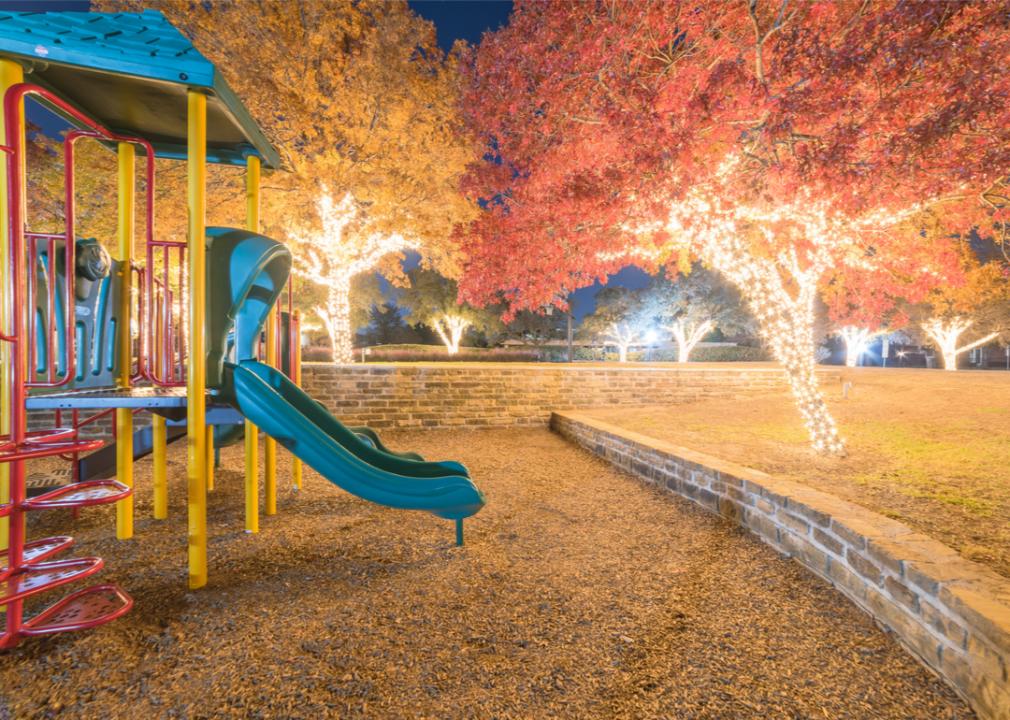 Although it conjures images of holiday greenery, this Dallas-area metropolis was actually named after Gen. Augustus Hill Garland. The town’s Christmas on the Square event features ice carving, a meet-and-greet with Santa, and a tree-lighting ceremony. 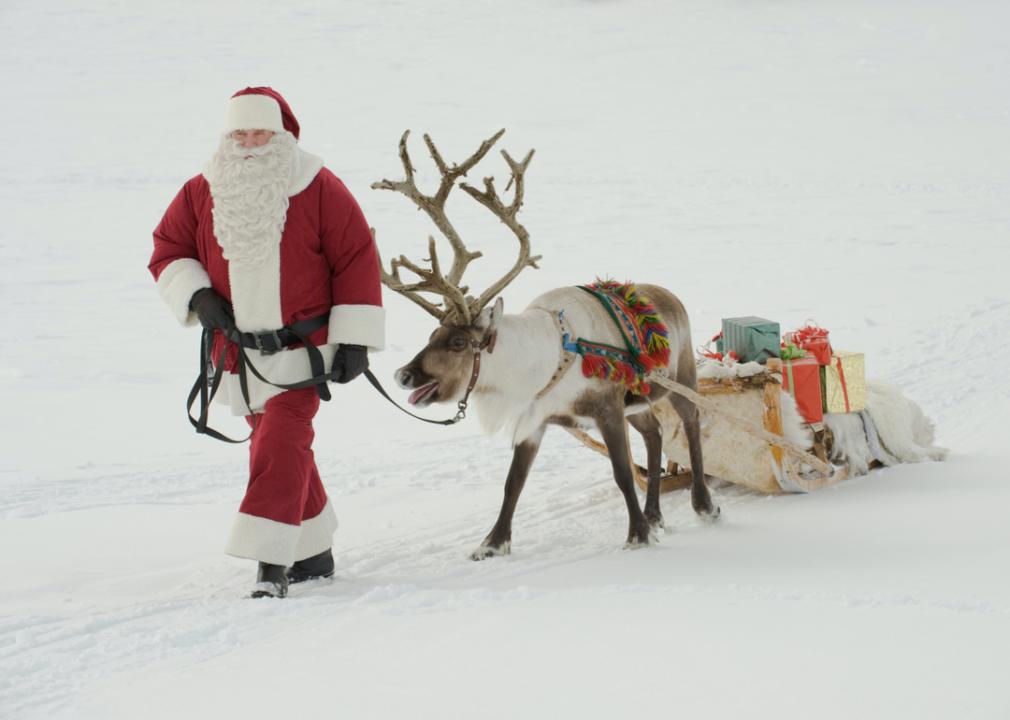 This unincorporated community made headlines back in 2005 when it changed its name to SecretSanta.com for a year in return for a large sum of money from that website. Santa is home to yet another post office that’s particularly popular during the holiday season among those wanting its festive postmark to adorn their envelopes.

Finding the perfect Valentine’s Day gift for your spouse can be difficult. It should be specific to your loved one, but can also be something for you to share.

Giving a personalized gift this Valentine’s Day, whether for your significant other or your bestie, is a great way to express your feelings.

If you’ve just started dating, gift-giving and holiday protocol can be difficult to navigate because nobody wants to come across too strong or indifferent.

Ex-officer texted photo of Tyre Nichols to others

Newborn and toddler saved from rubble in quake-hit …

Search underway for man who fell off barge in Adams …

Senate passes bill to create board for Jackson’s …

Crane fire leads to temporary closure of I-20 in …

Engagement sessions to be held for Yazoo Backwater …

Man arrested for 2017 homicide in Vicksburg

Senate passes bill to create board for water system

Crane fire leads to closure of I-20 in Warren County