What to Know About Coronavirus

The man told officers the suspects took his vehicle and tried to run him over. Investigators said the women abandoned the vehicle on Kennedy Farm Parkway and flattened two of its tires before leaving the scene.

Around the same time, officers were dispatched to Stoneybrooke Drive after receiving reports about people banging on doors of homes in the area. They found 18-year-old Serenity Brown walking between the homes. Investigators said she admitted that she was involved in the carjacking with two teens.

Officers said they found 16-year-old Monyetta Montgomery and 16-year-old Lauryn Smith walking near Louis Wilson and Deborah Drive. Investigators said the teens also admitted to being involved in the carjacking.

Officers discovered the three women used a kitchen knife and a can of insect repellent to steal the victim’s car. He was able to identify the three women as the suspects.

Brown has been charged with armed carjacking, directing youth to commit a felony, and malicious mischief. Her bond was set at $75,000. 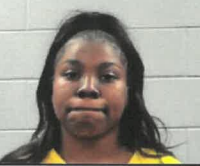 Montgomery has been charged with armed carjacking and malicious mischief. Her bond was set a $50,000.

Smith was charged with armed carjacking and malicious mischief. Her bond was set a $50,000.

All three suspects are expected to appear in court on May 13.

Fugitive UConn student suspected in 2 murders is arrested in Maryland

Peter Manfredonia was taken into custody at the Pilot Truck Station near the Washington County Sheriff’s Office in Maryland after six days on the run.

SAN FRANCISCO (KRON) – A 94-year-old San Francisco man was attacked and killed on Monday morning while walking his dog.

The suspect, who is now facing murder charges, is a homeless man well known to others in the area.

RALEIGH, N.C. (WNCN) – COVID-19 may have ruined prom for the class of 2020, but one North Carolina senior was able to go to prom with the help of a 7-year-old who planned the whole thing himself.

Tips for paying rent and mortgages amid COVID-19 pandemic

SNAP benefits allow for online grocery purchases, with a catch

JPD officer placed on leave after video of confrontation surfaces